The Anglican Churches of the Brome-Missisquoi MRC: a heritage adapted to its environment

We can find an Anglican church in almost every town of the Brome-Missisquoi MRC. This denomination first came into existence with the reign of Henry VIII who proclaimed himself Supreme Head of the Church of England in 1563. Later, different views concerning the practice brought about the founding of dissident sections of the Protestant movement.

In the 19th century, the Church of England, Anglican by name, dominated all the English-speaking Protestant denominations of Canada. It enjoyed many benefits, among them, land grants for its temples. However, this was not quite so in the Eastern-Townships since most of the settlers here were of dissident Protestant denominations.

In 1804, Reverend Charles Caleb Cotton settled in the Seigneury of St-Armand and founded the first Anglican parish of the Eastern-Townships. When he was replaced in 1808, he moved to Cowansville in the core of Sweetsburg. His way of life was similar to that of any other settlement pastor of the time: volunteering community services, farming to earn a living and doing missionary work in Dunham.

Life was not easy for Cotton, nor for any Anglican pastors. Sometimes the atmosphere could be quite hostile in the villages. Worshippers would have to wait a long while before they were able to build their church; in fact, the Cowansville parish waited half a century.

The Anglican Church decided to adopt a neo-Gothic architecture for its temples. It is therefore an already well-established style that appeared in the region. Neo-Gothic architecture is all about elevations, building upward. Its main characteristics deal with symmetry and ogival arched openings. Often, the structure would be adorned with arrows, pinnacles and triangular gables. The church spire was usually placed in the middle of the building’s facade. All these elements are designed to bring worshippers to gaze up towards heaven. 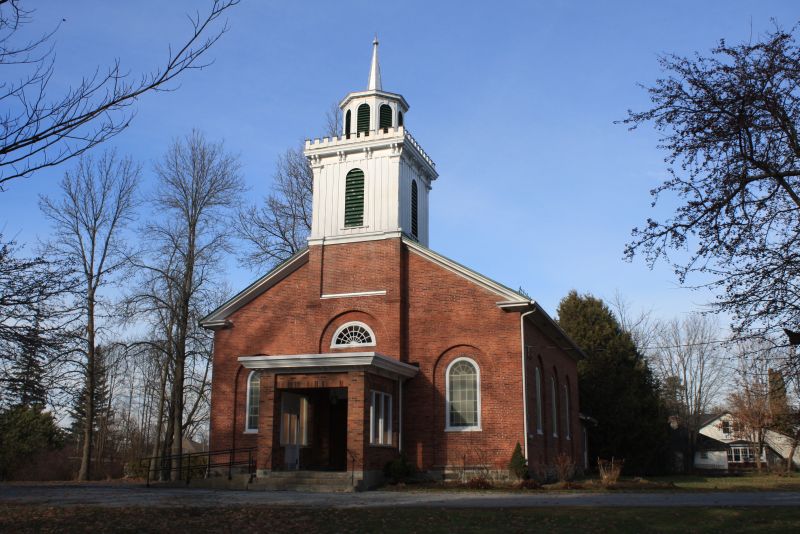 Built in 1832, St-James Church is the oldest Anglican church of the territory. Its architecture is reminiscent of some Neo-Gothic elements with the medieval aspect of the ornamental niches of the square based church spire.

Sometimes worshippers would build churches inspired by what was there already. A case in point for this is the Holy Trinity Church of Lake-Brome with a structure reminiscent of the meeting-house neoclassical model. 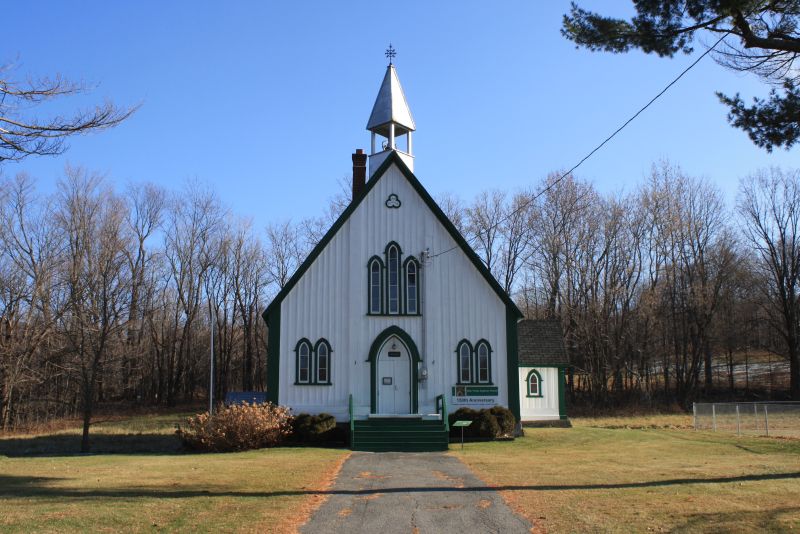 Starting in the middle of the 19th century, we often see small churches reproduce neo-Gothic-style wooden details. A case in point would be the Holy Trinity Church of Lake-Brome with its contrasting opening contours enhancing their ogival shape.

In the 19th century, rural settings developed their own specifically rural neo-Gothic style when builders raised churches according to their means and by integrating local materials. Sometimes using wood, sometimes red brick, these churches can be seen in many municipalities of the Brome-Missisquoi MRC, among them, Cowansville, West Bolton, Lake-Brome and Sutton. They have truly added a touch of originality to the landscape of the region. 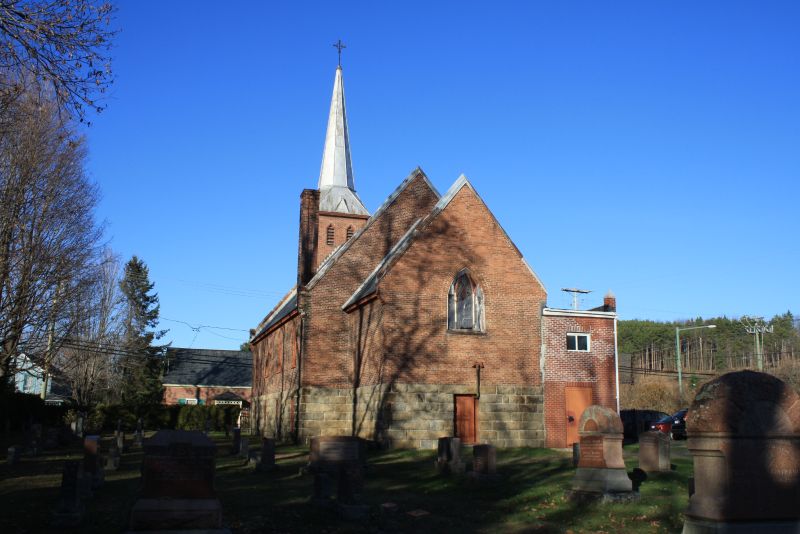 With its red bricks and its spire centred on the facade, the small Holy Trinity church in Cowansville is typical of the vernacular rural churches of the region. 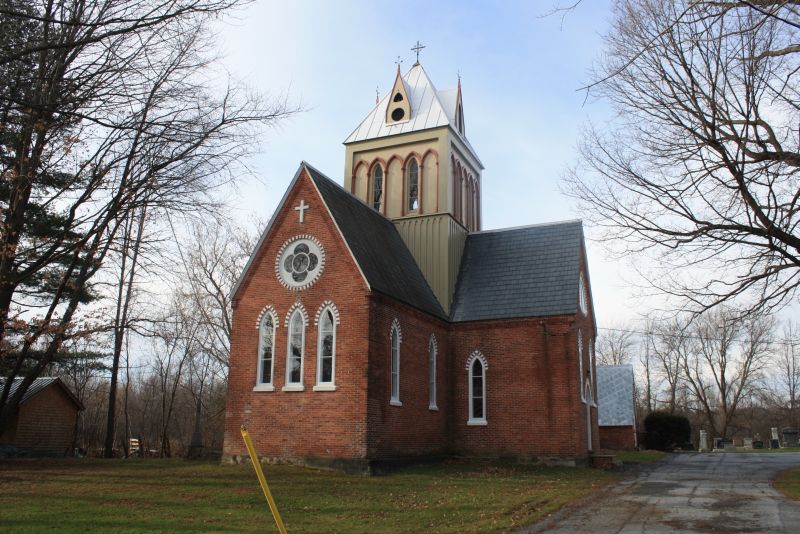 Qualified as exceptional, St-James the Apostle church in Stanbridge-East is unique in the Montérégie. The church is reminiscent of the German Ottonian style. It has a Latin-cross floor plan and its spire is set in the centre. Worshippers were thus able to evoke the Anglo-German architectural traditions of their country of origin.

Inside, the decor is sober and mostly characterized by fine quality woodwork in warm tones. In fact, the use of wood constitutes an important aesthetic element. The first stained glass windows simply presented patches of colour and were replaced little by little with iconographic religious themes or themes related to a local historical event. 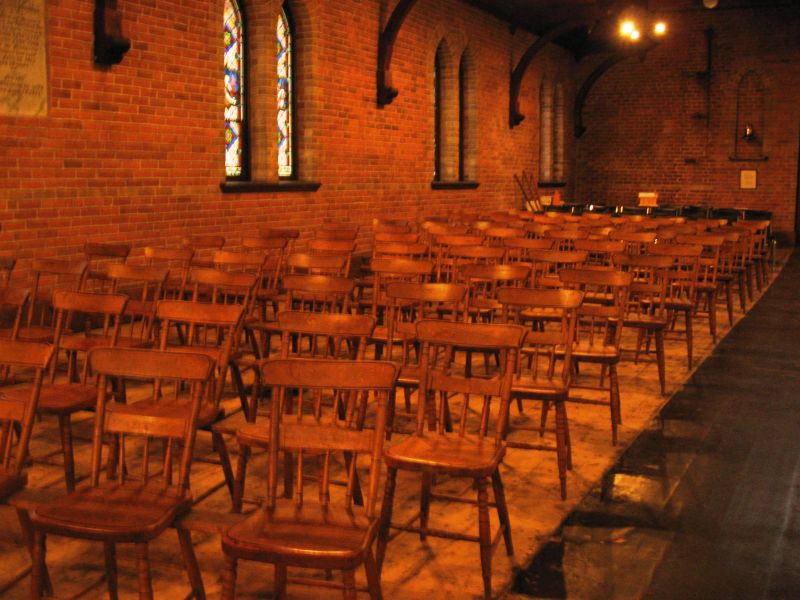 Originally, we wanted to evoke the idea that all worshippers are equal. This is why the chairs of the Bishop Steward Memorial Holy Trinity church in Frelighsburg are identical and connected to each other. 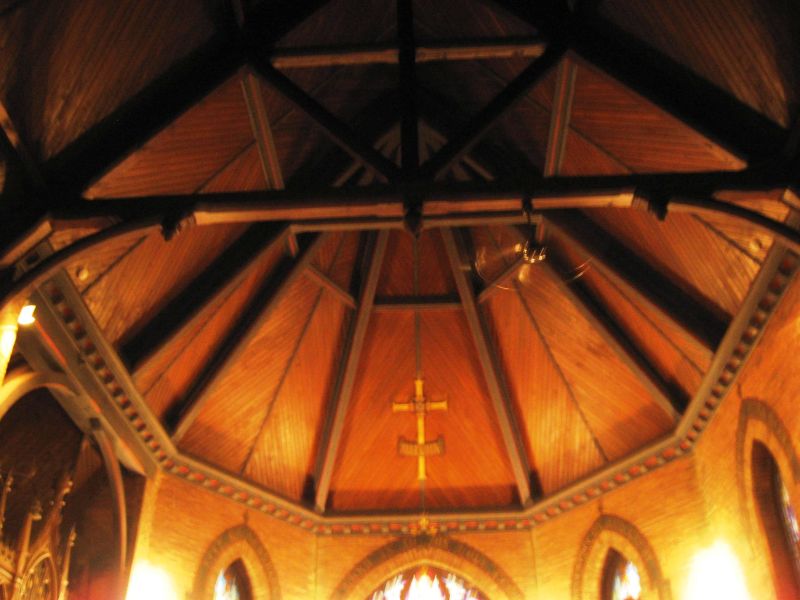 In Bishop Stewart Memorial Holy Trinity church of Frelighsburg, the slat covered vault the sculpted wood and the ornamental elements highlight an elegant and complex frame.

The altar is a sacred space delimited by a balustrade, choir or pedestal. Figurative symbols are rare. Music plays a key role during celebrations and therefore, musical instruments occupy an important place. 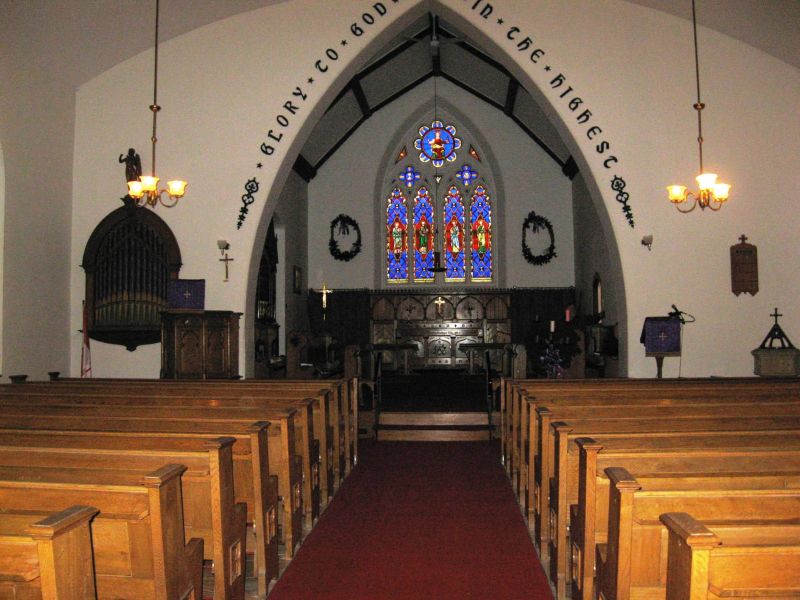 In the All-Saints church of Dunham, the liturgical furnishings include baptismal fonts (on the right) a pulpit (on the left) and a table (centre). The organ can be seen inside the choir (encased, on the left).

The Brome-Missisquoi MRC owns an original and unique religious heritage. Whether you choose to bike or drive, don’t hesitate to follow the routes taken by the settling founders faithful to the Anglican Church to discover these little jewels all along the roads of the region.

Where to Find Antiques in the Eastern Townships

So, you’ve just moved to our wonderful region and now you’re looking for that unique object that will enhance your […]

Since Antiquity, horses have been true human allies as much in wartime as for commerce and agriculture. Early on, men […]