The Catholic Churches of the MRC of Brome-Missisquoi: A Colourful Heritage

The Catholic Church was introduced to North America during the French colonization. The faith’s premise brings Christians together in communion with the Pope and his bishops, perceived as the successors of Jesus Christ’s Apostles. Being liturgical, the Catholic denomination is defined through seven sacraments, of which the most important is the Eucharist which is celebrated during mass according to a well-defined code.

Originally from Ireland, English-speaking Catholics arrived in the Eastern Townships as early as 1815. From 1840 on, the scarceness of available land along the St-Lawrence river (where French-Canadians settled) caused French Catholics to migrate towards the Eastern Townships as well. Located near several old seigneuries, the Township of Farnham welcomed the establishment of a Catholic community, thus constituting one of the first poles of the development of Catholic parishes. For the first time, French language masses were celebrated in the Brome-Missisquoi area.

The development of Catholicism advanced rapidly during the 1870s as the English-speaking population declined to benefit the Francophones living in Brome-Missisquoi. However, on the whole, development is rather slow. Many parishes brought worshippers of both languages together. Catholic parishes were still being founded in the 20th century. As they await the construction of their churches, worshippers would practise their faith in private residences or public places. In East-Farnham, they would meet in the United Church.

The Catholic Church first adopted the neo-Gothic style for their places of worship but quickly incorporated neo-Romanesque forms to its architecture, distinguishing itself from other denominations. In most cases, the steeple is integrated and centred or otherwise placed on the ridge of the church roof. The exterior is decorated with statues, sculpted elements and outer siding finishes. The interior design is very colourful with its painted and sculpted artwork as well as its gold or silver work. The layout guides the worshippers towards the chancel—the sacred space where the Eucharist is celebrated.

The Catholic churches of the MRC of Brome-Missisquoi take on three main architectural styles: the neo-Gothic and neo-Romanesque influences as well as Eclecticism, very popular towards the end of the 19th century.

There are three churches in the region that distinguish themselves by their uniqueness. The St-Romuald church in Farnham appears as a monumental neo-Romanesque cathedral with its very imposing bell steeples. Modern, unique and equally exceptional, the Sainte-Thérèse-de-l’enfant-Jésus church in Cowansville is the MRC’s only remaining modern-style church still offering services to its worshippers. More modest but still very original, The Sainte-Marie-Médiatrice church, in Brigham, is actually a hotel that was converted into a church and presbytery around the year 1925. Typical of practices dating back to the French Regime, it combines the presbytery and place of worship under the same roof. 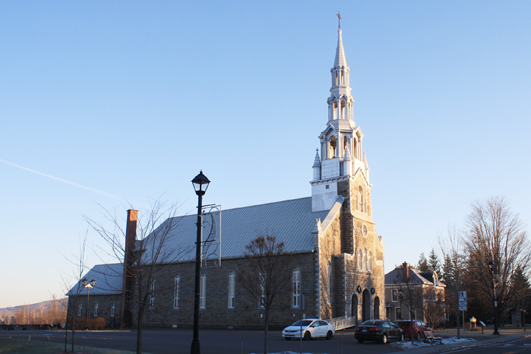 Saint-François-Xavier Church in Bromont (1889–1891)
Typical of the Eclectic style, the church design borrows from different architectural vocabulary, among others the neo-Gothic with its gabled roof and the symmetry of its openings as well as the strong presence of neo-Romanesque semicircular arches. 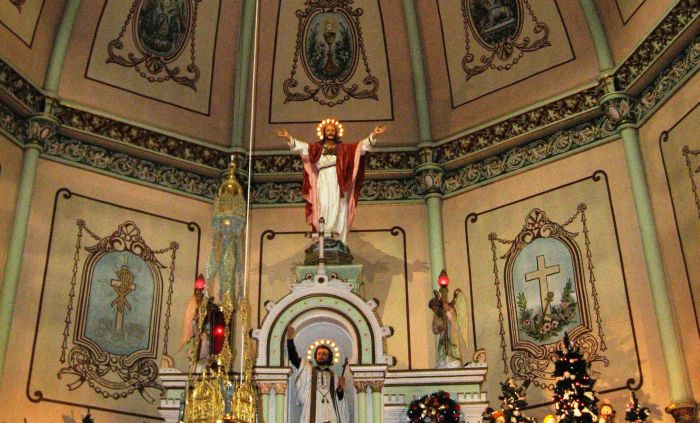 Saint-François-Xavier Church in Bromont (1889–1891)
The illuminated halos, dating back to the beginning of the 20th century, mark the triumphal arrival of electricity. The pilasters, painted ornaments, the lights and finely wrought mouldings in the chancel were created to be awe inspiring. 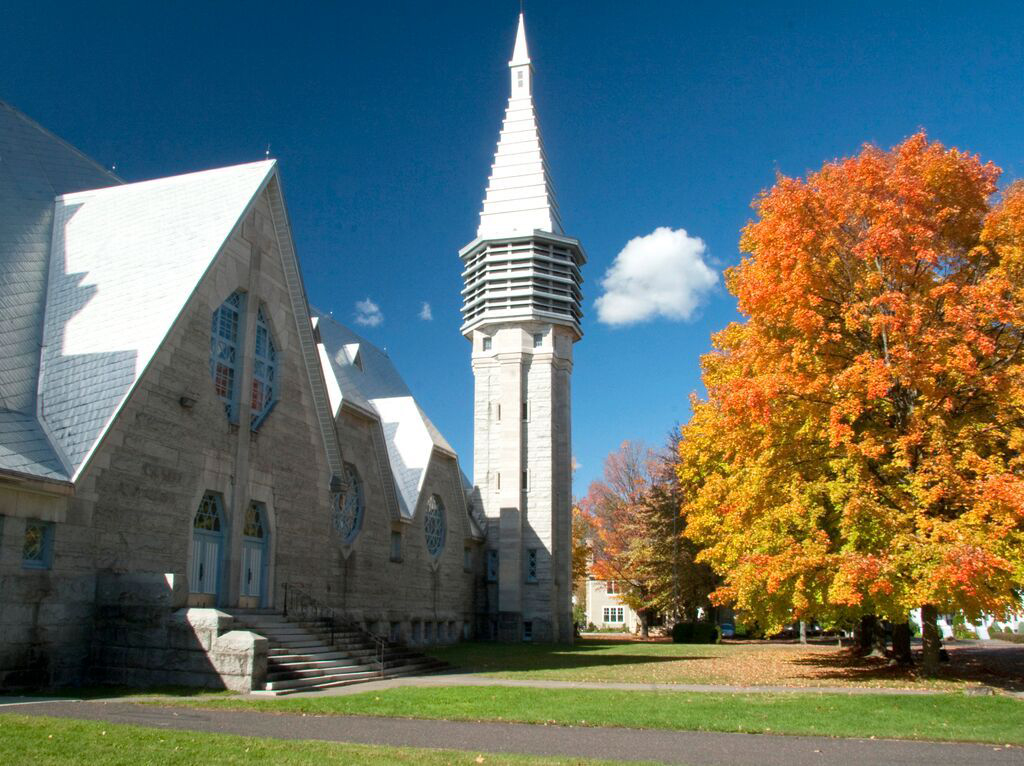 Sainte-Thérèse-de-l’Enfant-Jésus Church in Cowansville (1951)
Selected for their esthetic impact, the embossed cut stone produces a play of light and shade varying according to the time of day. The roof gables enhance the brightness of its sheet metal; Beauty through simplicity! 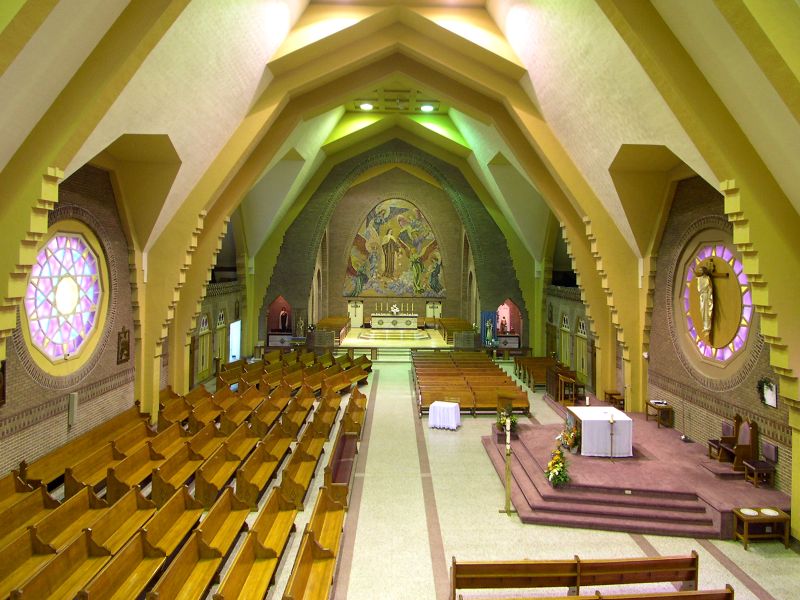 Sainte-Thérèse-de-l’Enfant-Jésus Church in Cowansville (1951)
According to Dom Bellot, each element has its function. Light is dominated by Form and, along with colour, all are essential. The lines and shapes distribution must create an effect of flowing movement. In this case, the beams support the building, their pointed arch shape is quite esthetic and their positioning in series produces the illusion of depth. 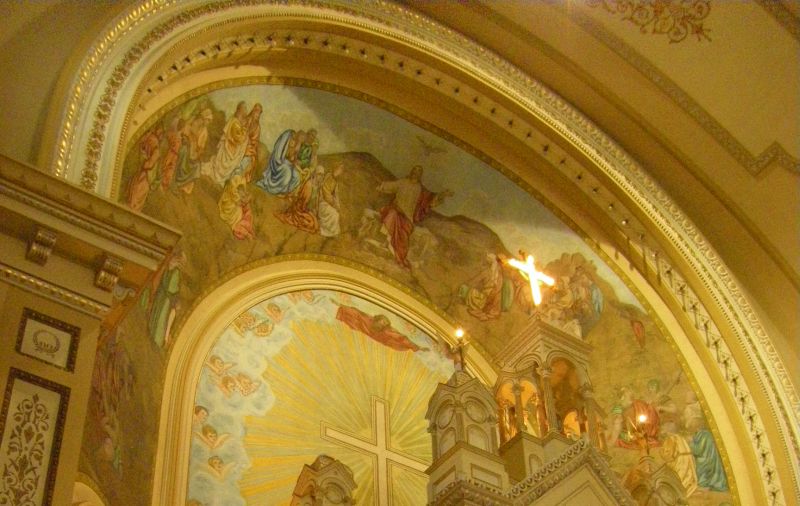 Saint-Romuald Church in Farnham (1903)
The painted decor in the Saint-Romuald church chancel was completed by Ozias Leduc from 1905 to 1908. Cherubs, cornices, keystone arches, composite order capitals and considerable woodwork complete the rich and sumptuous decor. 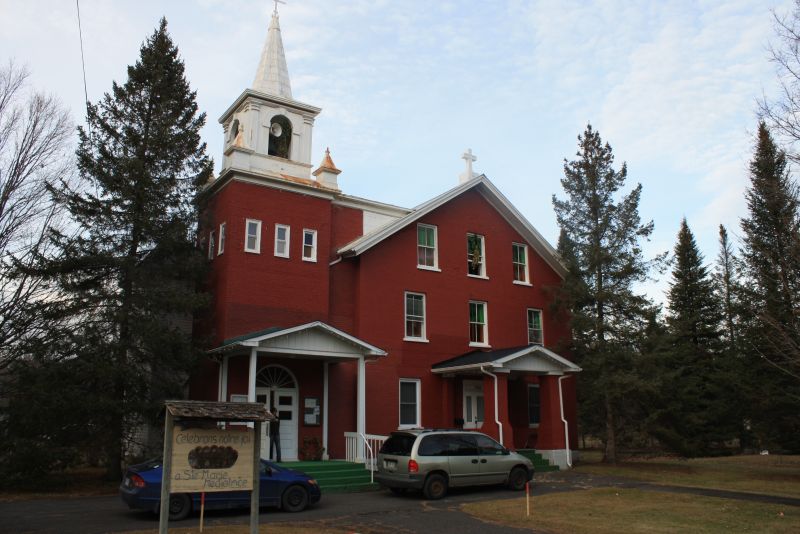 Sainte-Marie-Médiatrice Church in Brigham (1925)
Once a hotel, the authentic building is still recognizable with a rectangular floor plan and a gabled dormer roof. Separated from the main core, the bell steeple is atypical and evokes a Protestant church influence. Together, it distinguishes itself from other churches in the MRC of Brome-Missisquoi as much by its originality, design as by its style and function.

Whether by bike or by car come and visit the different municipalities of the MRC to discover our original, quite unique, Catholic faith heritage throughout the region.