Home to several religious denominations, the churches and temples of the Brome-Missisquoi MRC, suggest you take on this stimulating observation activity if you’re interested in the following feature of their architecture: The church steeple.

The steeple is an integral part of the church, often taking the shape of a tower or evoking one. In ancient times, simple small bells or chimes adorned temple walls. These were soon replaced by campanili up until the ninth century when the first steeples were built. For the clergy, they were a symbol of pride and were raised higher and higher becoming more and more ornate over time. The goal was to demonstrate divine domination over the territory.

The steeple was first used to call worshippers to the Eucharist. Later, depending on the bell’s tone, it would announce a happy event, a marriage or a baptism, or else a funeral ceremony for one of its parishioners. At one point, they would invite worshippers to pray as it was the case for the Angelus. As well, before the invention of the alarm system, bells were used for this purpose and would ring repeatedly and in a prolonged manner to alert the population of an imminent danger such as a fire, for example. 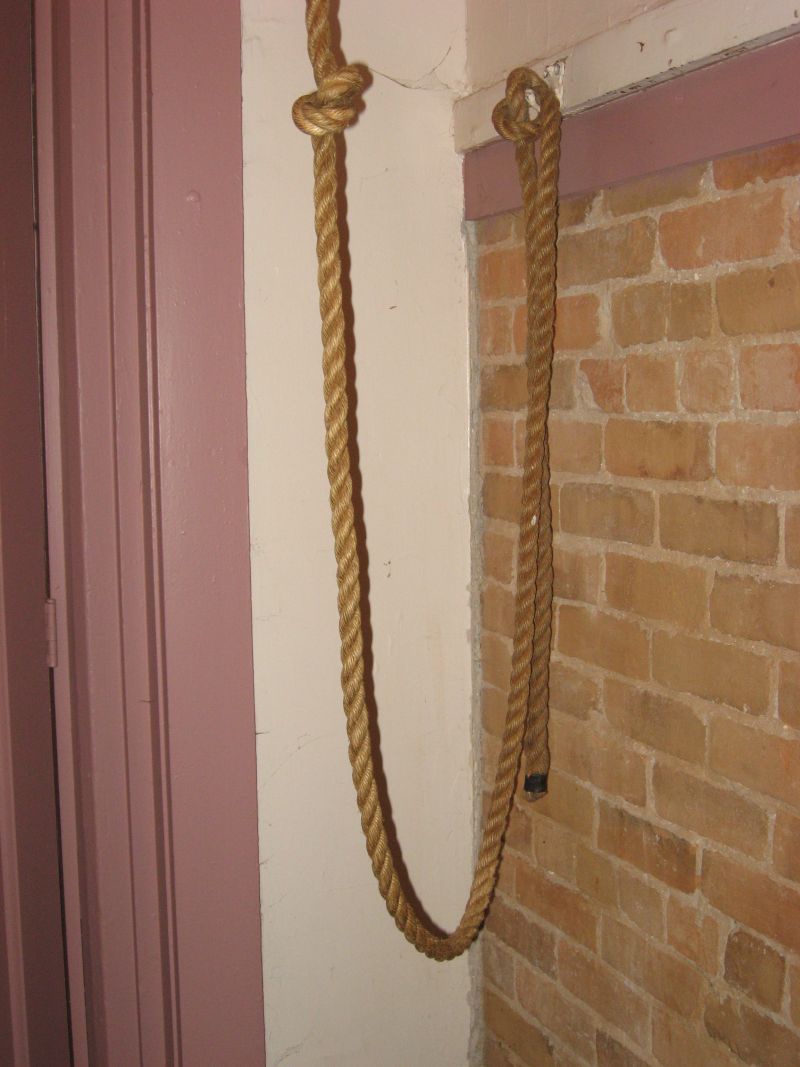 Bell rope of the Anglican Trinity Church of Cowasnville

At first, bells were rung manually, but as time went by, bell ringers were replaced by independent mechanisms such as sound recordings. Some churches in the MRC have kept the traditional system, the Anglican Trinity Church in Cowansville is among them.

In general, the Evangelical denomination built churches in the style of the Meeting House, thus, without a steeple. Over time, many congregations have added this architectural element to their place of worship. As for the Catholic and Anglican churches, the steeple is an integral part of their Neo-Gothic style which presents a natural upward construction. 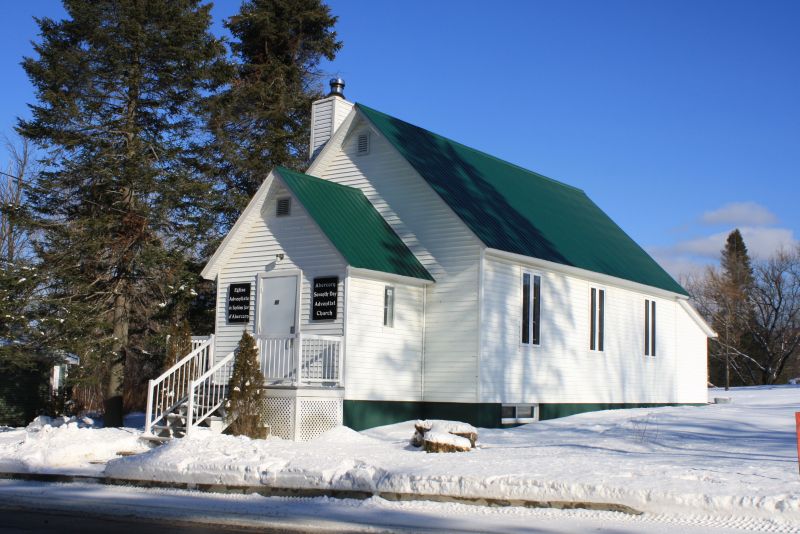 Built in 1931 without a steeple, the Seventh Day Adventist Church adheres to the territory’s earlier Evangelical congregation principle of modesty, although it was built at a later period. The temple therefore has conserved the general appearance of a public meeting hall with no steeple.

A church steeple is set on the roof or on a square, circular or polygonal tower. The tower is mostly built on the main and lateral facades. A great number of steeples are placed over the nave or above the main entrance. For churches with a cruciform floor plan, the towers are set atop the transept.

The bell-tower-porch is the most typical type of steeple found in the MRC. Generally, more or less protruding the building, this tower can be centred, or not, on the main facade and constitutes the main entrance to the church. Lateral towers also lead inside. 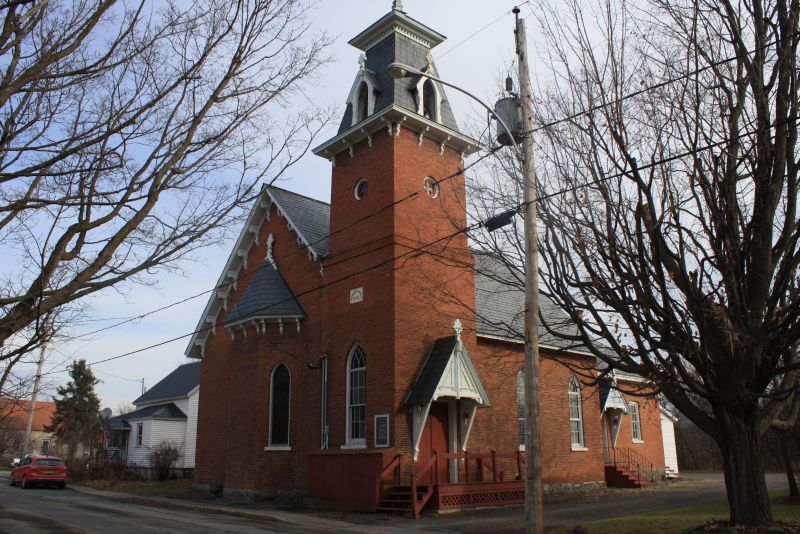 The bell-tower-porch of the Stanbridge-East United Church sets itself apart from others with its elaborate decorative details and its pavilion roof adorned with consoles. Built on the lateral facade, worshippers enter right by the chancel.

The steeple, set on the roof, is the second most important type in the MRC. Generally, it has a base, a belfry containing the bells, which is sometimes closed, or a campanile, a small open steeple. These elements of its structure are more or less complex, depending on the style of the church. 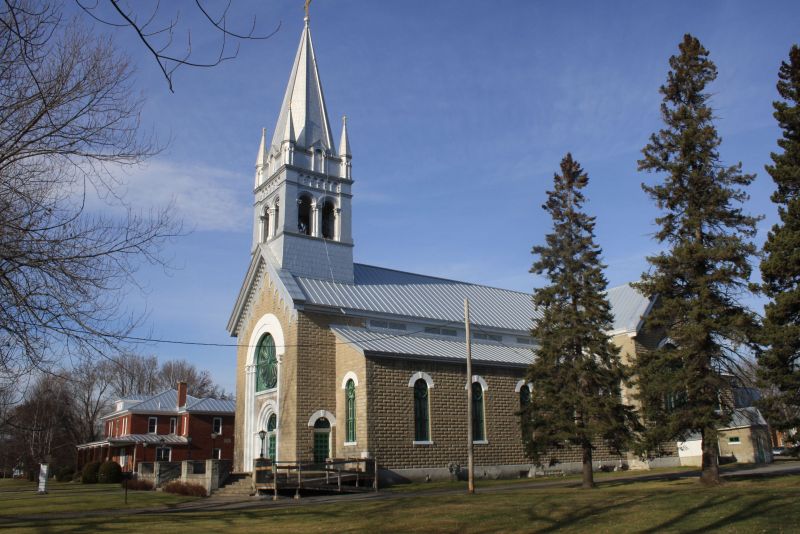 The adorning of a steeple can be simple or complex. Because of its Neo-Romanesque influence, the magnificent steeple of the St-Damien Parish church draws several elements of this style. Its square base is mounted with a belfry presenting arched openings. The structure is also adorned with sculpted elements repeating the arch shape. Pinnacles are set on its four corners and a cone shaped spire tops the structure. 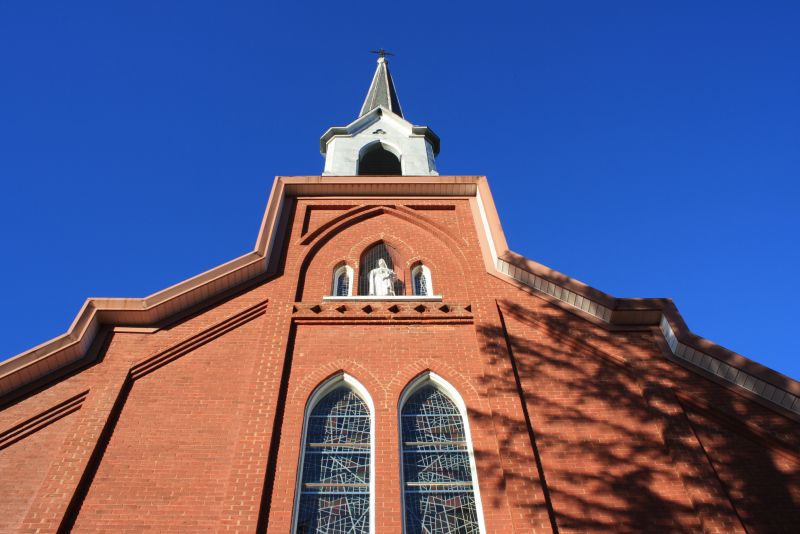 Sainte-Rose—de-Lima Church in Cowansville sets itself apart from other churches with its vertical pilasters evoking the idea of a tower fused into the base, sculpted onto the brick and joining the structure’s roof. The effect is accentuated by upward elevated openings and a statue adorned with brick work. The string course and pilaster layout suggest the presence of a tower integrated into the main building.

The study and comparison of architectural elements are interesting because they allow us to acquire a more in-depth understanding of church steeple compositions: the materials used, adornments and colours, unique or distinctive elements.

Many churches of the region have similar steeples that differ only in some minute details. It’s up to you to identify them!

Whether by car or by bike, don’t hesitate to set out and discover these churches, true architectural jewels established throughout the region.